1. Why do you think that most religions are performance-based? Why is this an easy default position?

2. As you put yourself in the shoes of a follower of God in Israel before the time of Christ, what strikes you about having to know and follow 613 Old Testament laws and their interpretations? What might living like this be like?

3. Modern day Christians aren’t immune to the trap of performance-based religion; what activities might we do today as a means to be right with God but with faulty motives? Are these activities bad? How can we recover a right motive for these activities?

4. Pastor Hawks noted that the Law (those 613 Old Testament rules and regulations) was given to show us how much we don’t obey God. Consistently falling short, we’d have no other option but to come to God under the banner of grace. When you fall short of God’s expectations, do you find it easy or difficult to come to him under the banner of grace? Do you struggle to freely accept his gift of grace?

5. In your relationships with others (spouse, kids, friends, etc), are your actions, words, or feelings toward them based on their performance or your grace? How does that play out in those relationships?

6. Grace is very much a New Testament word (used 180+ times) versus an Old Testament word (used 8 times). Jesus changes everything. As you think about the difference between performance-based religion to a grace-based faith, where does Jesus fit in? What did He do to cause this shift?

7. Reading through Ephesians 2:8-10, what is the relationship between grace and works? Have you ever experienced a situation where a good work seemed like it was literally placed right in front of you by God? How did you respond to the opportunity?

Pastor Hawks spent the rest of his message on grace exploring Luke 15:11-32, the parable of the Prodigal Son (or the Tale of Two Sons, as Pastor Hawks called it). This familiar parable is the final of three that Jesus shares in Luke 15 when the Pharisees grumble that, “This man receives sinners and eats with them.” (Luke 15:2 ESV) All three parables involve something being lost, the lost item being found, and the finder rejoicing at its finding.

8. Do you find yourself identifying with the son who stayed or the son who returned? Why do you think this is? What is it about the other side of the story that bothers you?

9. What attitudes, tendencies, or actions in your life do you need to change to treat others more like the father treats his sons?

10. Does our modern American culture value the attitude of the father upon the return of his son? How might our modern culture view the characters in this story?

Pastor Hawks noted seven lessons he gleans from Tale of the Two Sons:

11. Looking through the performance-based religion lessons, which one resonates with you the most? What is an example of this lesson in your own life?

12. Looking through the grace-based faith lessons, which one resonates with you the most? What is an example of this lesson in your own life? 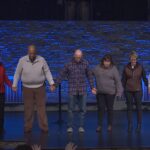 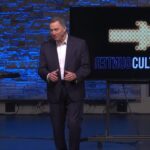